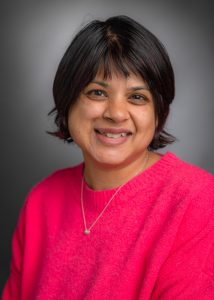 Pratiti (Mimi) Bandopadhayay, MBBS, PhD, is a pediatric neuro-oncologist and scientist within the Dana-Farber/Boston Children’s Cancer and Blood Disorders Center, an assistant professor of pediatrics at the Harvard Medical School, and an associate member of the Broad Institute of MIT and Harvard.

Mimi was born and raised in Australia, where she completed her medical studies (Monash University), PhD (University of Melbourne), and specialty training in pediatrics and hematology/oncology (Royal Children’s Hospital and Monash Medical Center, Melbourne, and the Australasian College of Physicians), followed by further training in pediatric neuro-oncology under the mentorship of Dr. David Ashley.

In 2011, Mimi joined the team at the Dana-Farber/Boston Children’s Cancer and Blood Disorders Center, where she completed subspecialty training in pediatric neuro-oncology under the guidance of Dr. Mark Kieran, followed by post-doctoral training  at Dana-Farber Cancer Institute and the Broad Institute under the mentorship of Dr. Rameen Beroukhim.

In addition to her efforts in the Lab, Mimi is a member of the clinical pediatric neuro-oncology team in the Dana-Farber/Boston Children’s Cancer and Blood Disorders Center, contributing to the care of children with brain tumors. These children are a constant motivation for Mimi (and all members of the Bandopadhayay Lab) to undertake translational research that is dedicated to improving the outcomes of children diagnosed with pediatric brain tumors.

Fun fact: Mimi loves to travel and explore the world! Highlights include opal hunting at Coober Pedy; tasting chocolate at the Cadbury’s Factory in Tasmania; horse riding during tropical rainstorms in Northern Queensland; kayaking the Dart River in New Zealand (where Lord of the Rings was filmed); dumplings in Hong Kong; snowmobiling, ice-caving, and Northern Light chasing in Iceland; and snorkeling the Great Barrier Reef.